Deep in the mountain-like region of Southeastern Ohio, there’s the abandoned town of Moonville. Finding Moonville online was easy, finding it in real life was much more difficult. We set our GPS, and followed it up and down hills, around mountains, through forests, on dirt road and paved roads, not seeing another car for a long long time. At one point, we passed a large white house set back from the road.

It was disheveled enough that it *could* have been abandoned, but also new enough that it had a dish for tv. There were no vehicles that we could see. Louie slowed the car down and we thought about going in. There was quite a yard in the front and we couldn’t see any sort of driveway. In fact, the tire indentations in the long grass that could have indicated a driveway were interrupted by a ditch dug close to the road. It almost seemed as if someone had dug it on purpose, to prevent people from taking the “driveway” towards the house.  As we sat and discussed, I noticed that the house had a side wing with a sliding glass door that was partially open. Could be an indicator that someone wanted some fresh air inside, or it could just be the disarray that abandoned houses are usually left in. Louie was convinced it was abandoned, but Louie thinks that just about every house that looks slightly disheveled is *obviously* abandoned.

Finally, after not being certain that we were ever going to make it to Moonville, we drove down a dirt road and saw a few cars off to the side in a little parking area. We pulled over as the GPS said we’d reached our destination. We got out of the car and walked down the path towards some giant concrete bridge supports. Unfortunately, no bridge remained spanning the river below. What had once been a busy train trestle was now just some graffiti’d concrete.  The railroad tracks were all removed decades ago. I could see across the way the huge Moonville train tunnel. It was amazing. We couldn’t negotiate the steep decline to the river, let alone safely cross the river to get to the side of the tunnel, so we went back to the car.

I checked the GPS on my phone and it said that there was a Moonville Cemetery a little way back up the road. We left the car where it was and walked back for a bit. Soon, my GPS said that we were right next to the cemetery, but as we looked to our right, all we saw was a tree covered embankment. I remembered seeing another dirt road that seemed to go up the hill some more, so we kept walking towards that, hoping it would sort of circle back and we’d discover the cemetery at the top of the embankment. Our hopes were realized when we discovered a small patch of land on the top of the hill containing several small headstones. One of them had what looked like a new flag on it and two people standing near them. Not wanting to disrupt them, we kept our distance. Turns out they were just walking their dog. We explored every headstone, there were only a few.  They were all fairly small, especially by todays standards. I’ve read that many of the inhabitants of Moonville were buried here, so I can only imagine how many unmarked graves there are. After we had spent a significant amount of time on the hill, we picked our way back down through the trees.

We saw there was a bridge back on the road and drove over it to another parking area, and then discovered we were now on the same side of the river as the Moonville Tunnel! A very pleasant hike through the woods along the river took us straight to the mouth of the tunnel. 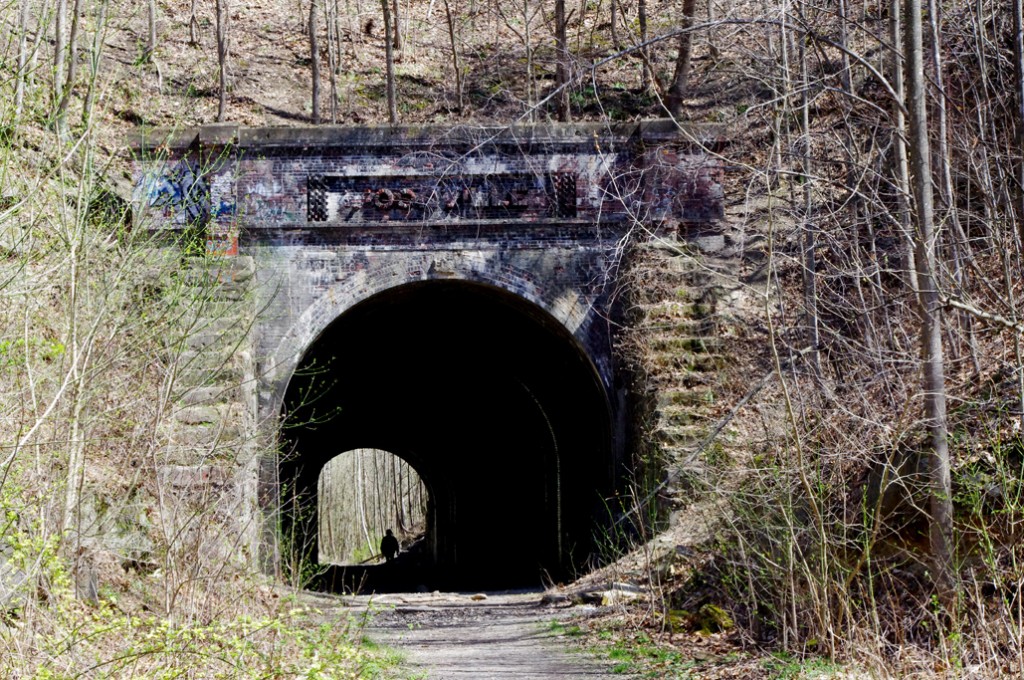 Originally built in the 1850’s, the Moonville Tunnel housed the track of the Marietta-Cincinnati Railroad, which ran from, you guessed it, Marietta to Cincinnati. When the railroad was diverted though the area,  (as a result of landowner Samuel Coe convincing railroad owner William Cutler to build on his property for free, in exchanged for hauling coal and clay off Coe’s land) the town of Moonville sprouted.   It was founded in 1856 and never contained much more than 100 people. The inhabitants of Moonville were predominantly miners, and the town had homes, a saloon, a school, and depot. It reached its peak in the 1870’s and was completely abandoned by the late 1940’s. I believe the railroad was still in use until the 70’s (it had been purchased by B&O railroad in 1887, and then B&O merged with two other railroads later). The last train ran on the tracks in 1988 and then the tracks were torn up and moved. Louie and I marveled that there was no trace of the railroad left. No tracks, no iron spikes, railroad ties, no nothing. The tunnel itself is gorgeous. The name “Moonville” is laid out in brick at the top of the arch on each side. Louie climbed all the way to the top but I’m mildly afraid of heights so I stayed on the ground. The tunnel is just long enough to be scary, but not long enough to get lost in the darkness. It’s covered with graffiti inside and there’s a plaque saying that the tunnel was repaired in 1903-1904. It’s certainly a marvel, the perfectly laid brick that has stood the test of time. We took some time to think about the workers who built the tunnel and what sorts of instruments they had at their disposal. Certainly the technology wasn’t advanced as it is today, but they definitely knew what they were doing. We walked through to the other end. At one point, shortly after entering the tunnel, someone appeared at the other side, silhouetted against the bright sunlight coming in the other end. It was startling, but as they walked through towards us, we realized it was an actual real person and not the manifestation one of the many ghost stories surrounding the tunnel. I kept hoping that some of the pictures I was taking would result in some sort of apparition, but no such luck.

After we walked through the tunnel, we headed back to the car. We had no idea where the town could be and had all but given up on finding it. On the way back to the road, we passed a woman with a camera. Louie, always the friendly one, struck up a conversation and we asked if she knew where the actual site of the town was. She said it was back across the road and to look for daffodils. She said that she knew the land pretty well and there wasn’t much left of the town. She also asked if we had seen the wooden tunnel. I remembered reading something about a wooden tunnel online and we got excited. She said it was sort of hard to get to by driving and she’d be happy to have us follow her there. But as she was only on her way to the Moonville Tunnel and we were on our way to the town site, we declined and said that maybe we’d see each other back at our cars and then could go. 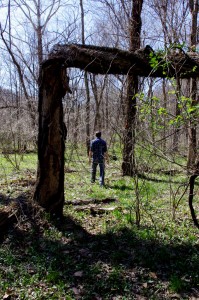 Across the road we ventured out into woods looking for any sort of sign of a town. We found a few clumps of daffodils but there was no evidence of buildings. We wandered around there for a bit and found pretty much nothing. We did, however, find the remains of another bridge. Like the first, all that remained were the giant concrete supports. We climbed up a ridge that obviously was where the tracks once ran and noticed the telephone poles that ran along the ridge. We figured that was a clear indication that there had been tracks here at one time. We walked to the edge of the ridge to get a clearer view of the bridge supports and take some pictures. We were again a little bit in awe of the idea that a busy railroad had once run along this ridge, and now there wasn’t even a bed of stones on which the tracks sat left. As we made our way back to the car, we saw the woman we had spoken with drive past. We waved but she didn’t see us. Oh well. We decided to attempt to find the wooden tunnel anyway, but after several minutes of driving down various side roads and walking along former rail beds, we gave up.

We were disappointed not to find the remains of the town of Moonville, but because it hadn’t been inhabited since 1947, it’s not surprising that nothing’s left. Seeing the Moonville Cemetery and Tunnel were both amazing.

And now, the part you’ve all been waiting for: The Moonville Ghost stories!!! There are actually many ghost stories surrounding Moonville and the tunnel, and there are some websites listed below that explain them in much more detail than I will here. Several people perished on the railroad tracks. Apparently, one of the only ways to get from one side of the creek to the other was along the trestle of the (now torn down) bridge. At least one person is reported to have died as an unexpected train came along the trestle when they were crossing it.   Predominant ghost stories are of various railroad workers in the Moonville Tunnel. One of the stories we found said that a brakeman had been asked to check the brakes under the train and that while he was down there, the train’s engineer started it up and ran him over. A few of the stories mention that a worker who was probably intoxicated fell between or under cars and was killed. The result of all or some of these deaths is the appearance of a ghostly apparition in the tunnel, sometimes to the naked eye, sometimes in pictures (no such luck in our pictures, unfortunately). A lot of times the apparition is holding and swinging a lantern, or sometimes it’s just the lantern hanging in space. I encourage you to check out the links below for more detailed ghost stories of the Moonville Tunnel.

See the Tunnel of Moonvilleon the Gallery Page.

Moonville links on the Internet: