While driving through Arkansas, we did an internet search to see where there might be any ghost towns near our route and found the listing for Mallettown (spelled as one word, or as “Malletown” or as “Mallet Town”, depending on which sign or website you look at). We set our phone GPS towards the location and headed off on our route.

The GPS had us turn down a graveled road. Ok, no big deal, who knows what might be down here. Shortly down the road, we saw a truck ahead of us. It pulled over, we passed it, and it pulled back out behind us. The beginning of a horrible “Cabin in the Woods” remake much? Because of the narrow gravel road, I was driving slower than normal, which meant that the truck was pretty close behind us. To say I was nervous is an understatement. We drove down that road for about ten minutes. Shortly in, the GPS said that we arrived at our location, but there were no ruined buildings or abandoned town-things to be found. We continued to drive down the gravel road, still followed by the truck. We passed a farmhouse or two, and lots of green fields filled with cows. But no ghost towns. Finally we decided to turn around and head back. I pulled into a side access road, fearing that our companion in the truck would pull in behind us. Luckily, it kept driving and we both breathed a sigh of relief. We turned around and started heading back to the main road. 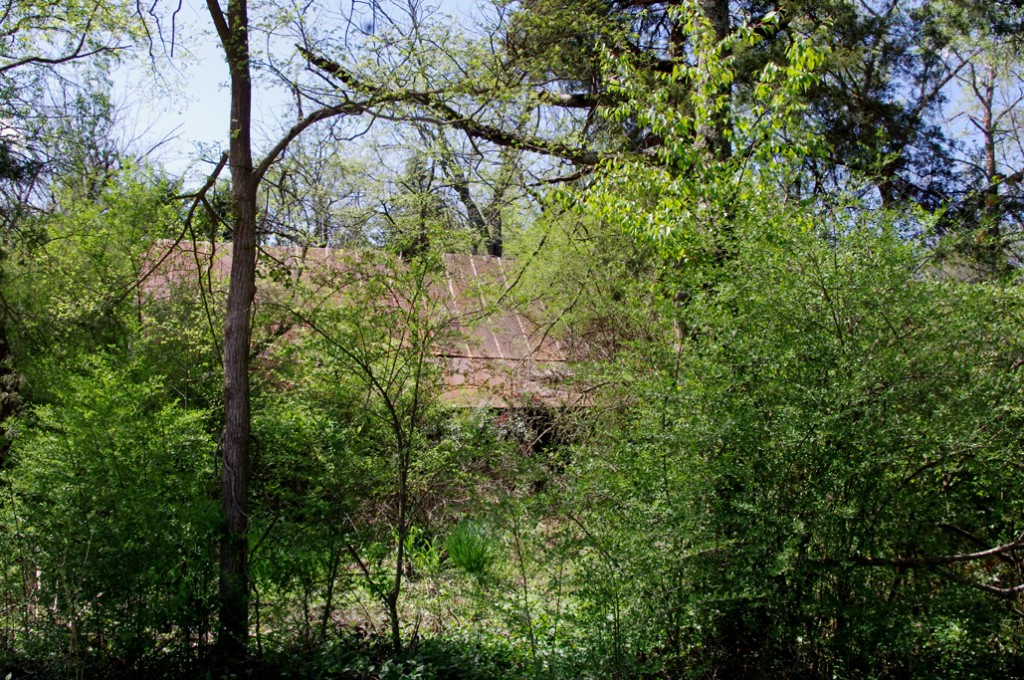 On the way back, though, we happened to see an overgrown farmhouse on the left hand side. We slowed down to look at it through the trees and discussed whether or not to stop. As the road was narrow, there really wasn’t a place to pull over. But shortly up the road was a side pull-in area, so I pulled in there and we again discussed going exploring the house. We decided to attempt it.

We walked back to the house, it was clearly not in use and overgrown with trees. No “no trespassing” signs that we could see, so we picked our way through the brush and to the house. It was pretty decently sized, and had a large front porch. As we stood there debating whether or not to venture under the porch roof/onto the rotted wood of the porch, a farm vehicle drove past the house. It pulled over, the occupant obviously looking at us to figure out what we’re doing. The door opened, I envisioned an angry farmer getting out with a shotgun. There was nowhere for us to run. I asked Louie if we should hide and he said he wasn’t going to. I sort of tried to duck down, but Louie just stood there in his bright blue hoodie, completely blowing my cover. An older man approached us (no shotgun, thank goodness). He didn’t try to make it through the trees to get all the way to where we were, though. Louie said hi and the man said hello back. Louie explained that we were just looking around and then asked if the man knew where Mallet Town was. Of course he did, and he proceeded to give us excellent directions in that chin-scratching thoughtful way that older folk do. Then, with almost a hint of excitement in his voice, the man asked if we had seen “the house on the hill”. We hadn’t. He also told us to watch out for “dug wells”. Who the hell is Doug Wells?? I thought. Is he going to come after us with a shotgun and a pair of dogs and chase us out of here? No. Not Doug Wells. Dug wells. In the ground. It took me about five minutes to figure it out.

We finally decided to brave the porch and go into the house (we had walked around the house as far as we could and, short from climbing in a window, there were no other ways to get in. One of the rooms had at least three layers of wallpaper on the walls; peeled off in various places to show the different layers. Very little was left in the house, but it was fascinating to imagine what might’ve been there and how long it had stood empty.

The house on (haunted) hill was drastically different. A large two story house, it was on a hill that we had passed shortly after turning onto the gravel road, so as we walked back to the ar from the first house, we immediately looked up and saw it. How we missed it, I have no idea, except that it was overgrown with vines and trees. We pulled up between it and some padlocked barns, and picked our way through the branches and vines. The porch ran the length of the house and was concrete. At first we came to window into a room filled with stuff. A few mattresses piled up, some clothes on hangers and in boxes, a few childrens toys. A newspaper rested on a shelf right near the window, Louie reached in to pull it out and it was dated 1986. Further down the porch was a door and we went inside. There was a fireplace in the first room, the mantel had fallen off the wall and was on top of a large old television set. We made our way through the rooms, and to me it was the scene of a ghost movie. The house was old fashioned, high ceilings, larger doors. Some of the doors were closed. Louie opened them for us to go through, but it made me nervous. I’m perpetually scared that we’re going to find someone in one of those rooms. Towards the back of the house was a smaller room with a toybox in it. It was very dark so we couldn’t see well. On the door, in a dripping scrawl, was painted “Play Room – If you mess up, clen up”. Talk about creepy. Through a back room was a door halfway up a wall. The door was open, revealing stairs that lead to a second floor. But the door was at least four feet off the ground. I assume that at one time, stairs extended down into the room and for whatever reason, they’d been removed. There was an overturned bucket in front of the stairs, so someone must’ve gone up there using that at one point. We didn’t try to follow their lead. Eventually I persuaded Louie that we should get out of there. I’ve got to learn to be less freaked out by empty houses, or I’ll keep cutting all of our adventures short!

After the house on (haunted) hill, we proceeded to Mallet Town by way of the farmers directions. We found the metal sign with the wire lettering that we’d seen online, and headed down that road. There wasn’t anything that we could tell was left of a town, exactly. A stone fence, a small out building buried in trees behind a “private property” sign. We took a few pictures from the road but didn’t get too close. There were many inhabited houses along the way, including a gorgeous new-looking church. Founded in 1841, one of the websites we looked at said they thought it was abandoned in the 20’s or 30’s, but we couldn’t find much more info than that. How can a town exist and then have no information left on it? There were obviously people still living in the area, and there was a green road sign that pointed us toward Mallet Town. Sadly, I haven’t been able to dig up much more information than that.

See the remains of Mallet Townon the Gallery Page.

Mallet Town links on the Internet: