In Rochester New York, there is one of the most amazing cemeteries that either of us have ever been to.

Founded in 1838, it is the United States first municipal rural cemetery. In the late 1830’s, there was a cholera outbreak in Rochester and it was realized that there wasn’t currently a cemetery to hold the 100+ deaths resulting from the disease.  So 196 acres was purchased to bury the dead.   Use of the cemetery didn’t stop after the outbreak subsided, though.  It is currently the final resting place for over 350,000 people, adding between 500 and 600 graves every year.  There are a plethora of notable personalities,  including John Jacob Bausch, Henry Lomb, Nathaniel Rochester, Hiram Sibley, Nick Tahou, Frederick Douglass and Susan B. Anthony.  Cremations at Mt Hope include George Eastman, the founder of Kodak.  There are at least three churches on the site, none of which are open to the public (to my knowledge), as well as a sealed catacomb system (we didn’t figure out a way in unfortunately).  Mt Hope is diverse enough to almost be a dictionary of tribute to the dead, with a vast range of headstones and markers, monuments, statues and mausoleums.  While part of the site seems to be fairly modern/traditional looking (flat ground, uniform headstones), most of the graves are on beautiful hills and in valleys, surrounded by trees and flowers.  On the many paths of the cemetery, people walk their dogs or jog.  In the spring and summer, it’s a popular picnic place.  “Friends of Mount Hope Cemetery”, a group focused on the preservation of the cemetery, offers guided tours as well. 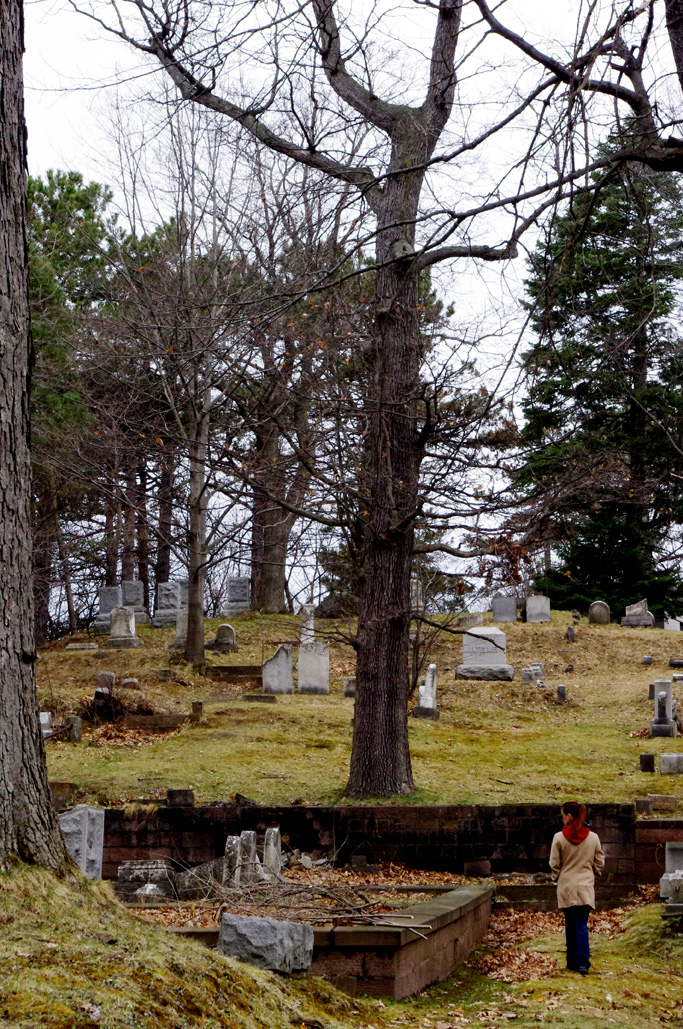 Our visit there was peppered with “ooo”s and “aah”s as we climbed the hills, walked down the paths or scaled the random and uneven stone stairs embedded in the slopes.  We marveled at what ingenuity it must’ve taken to transport heavy caskets all the way up these hills and inter them, almost perilously, into the slanted ground.  The monuments come in all shapes and sizes all over the grounds.  We peered in windows of mausoleums, always just a little bit scared that we would see something peering back at us….but also kind of hoping for that.   While the grounds themselves are not creepy (particularly during the day in late spring), the mystery surrounding some of the stones is.  Many of the stones have engravings that have been worn away with time.  Who were these people?  What did they do?  How did they die?  It’s all fascinating.

See the Cemetery at Mt. Hopeon the Gallery Page.

Mt. Hope links on the Internet: