We looked up Warwick, OK on the map and it looked like there would be several interesting things to look at. Located in a rural area, it was one of those places that doesn’t look like an abandoned town because you can’t completely tell which houses are inhabited and which ones aren’t.

We drove down some random roads and ended up coming out at an abandoned gas station. Not much left inside, except for an old cash register showing a sale of 75 cents and a CB radio. There was one of those fan things in the ceiling that was spinning around on and off and freaking me out. There were some wide open doors in the building, so I kept thinking that a raccoon was going to jump us. In the back of the store was a kitchen area and bathroom.   There were a few other buildings (barn types and trailer types) near the gas station, but they were the type that you can’t tell whether or not they’re abandoned, so we didn’t go near them. There was construction being done on a bridge down the road, so the whole thing was dug up, fresh reddish-brown dirt, various pipes and tubes and wiring along the side of the road. Being after 5:00, all of the workers had left and everything was empty in the windy sunset. 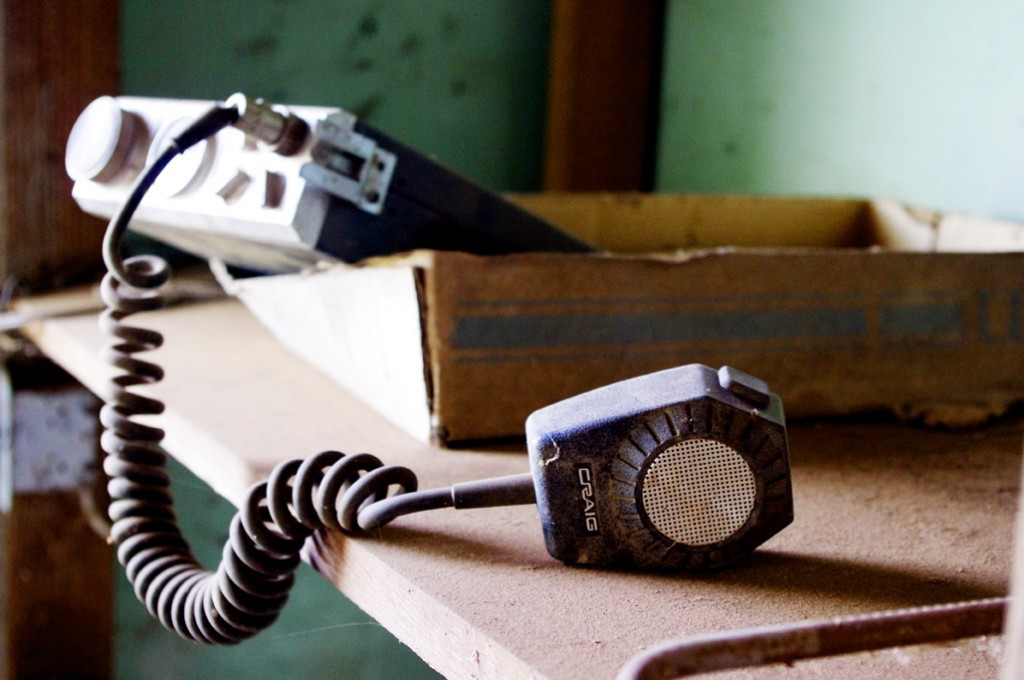 Being mildly unsatisfied with the promise of a ghost town and only finding a gas station, we decided to walk further down the road towards the under-construction-bridge to see if there was anything else to be seen. Louie saw a house in the distance so we went to check it out. We saw a few overgrown buildings on our left but again, couldn’t tell if they were private property or not. We approached the house, a yellow two story with a garage-like building attached to it in the back. It looks almost inhabited, but there was broken glass in some windows and the front screen door swung in the wind. We rounded the house towards the back, where there was the attached barn/garage area. It had everything in that would normally be stored there – a box of books, a pile of records, clothes strewn about, a bag of fake flowers, Christmas lights….all in that settled-in level of flatness, that says it hasn’t been touched in years. We carefully walked through it, trying only to step on visible flooring. You never know what might be under some of that stuff, and we didn’t want to accidentally step on anything gross. We went into the overgrown back yard, there was a basketball hoop, and some sort of platform. There was something that looked like a small rowboat but could have been some sort of planter? We could see the back of what was probably a roadside fruitstand from there as well. It had red white and blue fireworks spray painted on it. On the side of the house, there was a sunporch and the door was open, so we went in. We almost didn’t make it past that porch, as the stench was pretty bad. It seemed to originate from a pulled-out desk drawer filled with white socks. We could only imagine what animal had died under that pile of socks. Or why there was a desk drawer filled with socks in the first place.

We made it past the porch and into the kitchen. Obviously no one had functioned in there for a long time….but there were still some dishes in the dishwasher drawer, and jars of peanut butter and pickles on the counter. It was like the surfaces and walls and floors were covered with muck/mold/mildew, but the jars didn’t have any dust on them. There was even (I kid you not) a spray can of Pledge on the counter. It looked like it didn’t belong to the room. Was it left there by the people who lived in the house? Or was it left there by someone random, thinking it would be funny? Looking past the kitchen into what was probably a living room, I saw an arm chair facing away from the door. It was just at that angle where someone could be sitting in it and you’d never know. I started freaking out a bit, Louie pressed forward. The living room had the chair and a few pieces of clothing strewn about, as well as an empty entertainment center. Continuing through, we found a room where the floor was absolutely covered in clothes. You could see some places where they’d been boxed up, but then it seemed like the boxes had been opened and gone through. In the far corner of the room was an open closet, which was also full of clothes neatly on hangers. Right next to the door to this room was another door, on which hung a beautiful white wedding dress and a pink sequined dress. Again, it almost didn’t make sense that they were there. They didn’t have any dust on them, they looked in great condition, no stains, no missing sequins, no rips. Did someone come leave these things here? Or were they just inside the house enough and not near any windows that they didn’t get messed up from the weather? There was another room in the front of the house, with a floor also covered with stuff. Mostly clothing and boxes, I also saw a sleeping bag. This was the very front room and as we were looking into it, the wind slammed the screen door shut violently. We both jumped. I started getting terrified that someone was going to come into the house and demand to know who we were. It just didn’t make sense that *all* that stuff was just left there. Later Louie and I talked about those two rooms specifically, and he mentioned when he was younger that his friends and him had a few abandoned-house-type places that they would go to and mess around. Maybe everything in this house had been neatly packed up at one time and then some neighborhood kids had gotten in and gone through everything.

Upstairs, though, is where it gets more creepy. Louie lead the way and since he had the camera, I didn’t have anyone’s hand to hold, which made me nervous. We went up the carpeted stairs (the nice thing about newer abandoned houses is that you don’t have to worry quite as much about stairs collapsing on you). At the top of the stairs was a nice little loft room and then a bedroom. Under the window were some old and faded college text books. On the floor in the middle of the room was a trophy from a county fair. Also on the floor, was a book with award certificates put into clear sleeves, as well as a photo album with “Brad’s first sleepover” and pictures of kids in the very room we were in!! It was creepy enough to see evidence that someone had recently lived in this house, still more creepy that there was so much left there when the occupants left and even MORE creepy to see a picture of the room you were in from when that room was still in regular use. It was obvious someone had taken the time to commemorate this kids 9th birthday sleepover….but why wouldn’t they take it with them when they left? If you’re a kid packing up your room, that’s one of the things you make sure you leave with. If you’re a parent, don’t you bring all of your kids awards with you? On the wall hung some ribbons from a local fair, as well as a calendar. The last date on the calendar was December 2008. So this house was abandoned very recently. But why? I had had enough being in there, my anxiety was through the roof, so I begged Louie to leave.

As fascinating as that house was, we have *so* many questions. Who were these people, why did they leave.? Why didn’t they take any of their stuff with them? The house hadn’t been lived in for six years, but who knows what squatters were in there at some point, or what random teenagers got in there (we saw a few McDonald’s cups scattered around). Why did that family pack up their stuff and then not take it with them? When I was living in NYC, and left my apartment, I left some of the stuff packed up for the super to take (he said he’d be able to donate it or whatever). But who leaves their kids scrapbook or trophies. Who leaves an entire closet full of clothes all hung up? The only explanation that makes sense is alien abduction.

It’s only been a couple of weeks since we saw that house, but a large part of me thinks it’s probably already been bulldozed down. The way that some of the dirt was laid for the road construction makes me think that they were going to get rid of that house and it’s outbuildings. We found a few prescription pill bottles with the occupants name on them, but a google search turned up nothing. For whatever reason, those people had gotten out of that house and just left it, and a lot of their stuff, there.

Warrick links on the Internet: