Out in the open along a major highway is one of the last places you’d expect to find a ghost town. But that’s exactly where you’ll find the little abandoned town of Cuervo New Mexico.

We couldn’t believe it as we drove down I-40 (Route 66) and saw a series of abandoned buildings, all in a neat little row, and in various states of decay. The town of Cuervo was founded in 1901 as a railroad town. The railroad is very much still in use, and is just a short distance north of the town. With the growth of automobile travel across the country, Route 66 helped the town grow. Once a small hamlet of 300 people in the 1940’s, a short number of years later, the town was pretty much abandoned. Interstate 40 laid it’s course directly through the middle of the town – the majority of the abandoned buildings are on the south side of I-40, there may be a few on the north side but we didn’t check those out. Currently there is an entire road of buildings with various levels of falling down-ness, as well as a few abandoned (and stripped) cars. On a side road, slightly further from the highway, there are a few newer houses/trailers with current occupants. 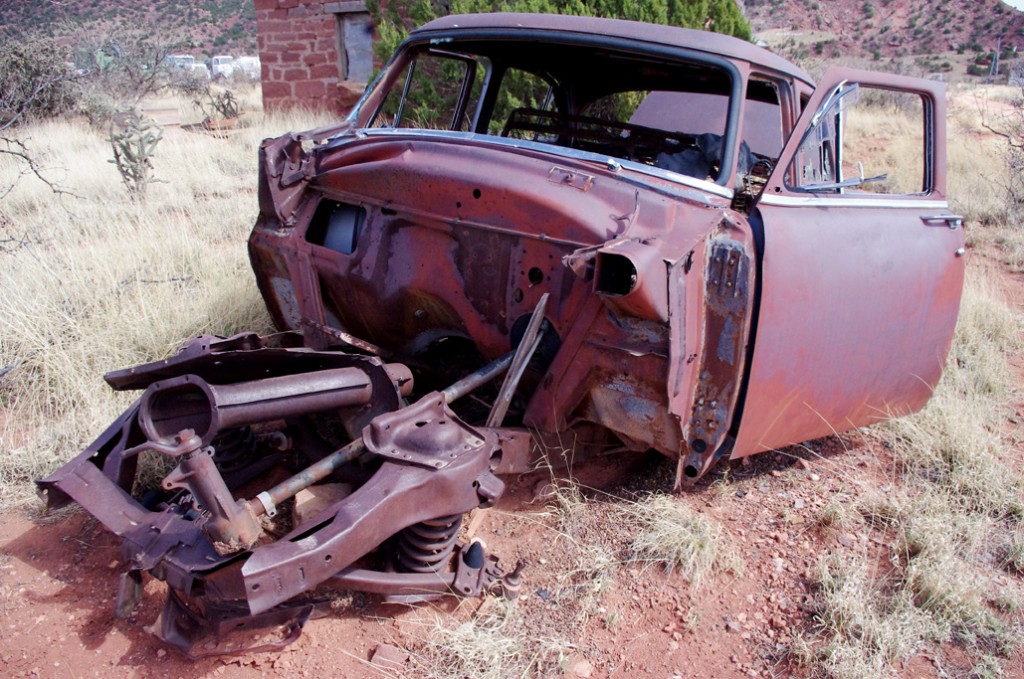 We explored many of the buildings, variously made of wood and adobe bricks. One of the buildings looks like an old boxcar, complete with metal ladder rungs up the side. There were lots of pieces of corrugated metal in the yards – we initially thought they were pieces of roofing that had blown off, but there were some houses that had the metal hung over the windows. Did some of the occupants attempt to board up the windows before they left their homes? Were they thinking about coming back some day? Most houses were empty of any sort of remnants of people, though there was one house that still had some clothing and papers in it. We found a 1st graders spelling book and a wedding invitation, as well as a dated utility bill. Why didn’t those people pack up everything and take it with them? Were they forced out of their houses quickly , too quickly to take their possessions? One house was full of the reddish brick dust, in one house the floor was covered in hay. Many of the houses had cisterns in their yards, as Louie and I leaned over to look into the dried up hole, we both worried about dropping our phones and sunglasses down the well. #Firstworldproblems. One building had a barbed wire fence, probably constructed around a garden to keep animals out. Another had a basement with a few stairs leading down into it. It was too shallow to stand up in, and very small. A root cellar? A place to hide from tornados? We don’t know. Louie went halfway down into it, (deep enough to get a cool looking picture) but that was all. 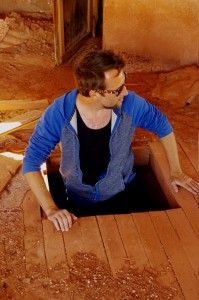 It was strange being so out in the open – everyone’s seen abandoned houses along the side of the road, overgrown with trees and vines, seemingly impossible to get to without significant effort. I’m always worried about trespassing. But this was just a series of buildings right along the road, in the middle of the day in New Mexico, with a gorgeous blue sky, and a hill in the distance with the word “Cuervo” spelled on out on it, and the busy highway on the other side. We were there for over an hour and didn’t even get to every building. The whole time we were there, we only saw one small SUV drive up towards the houses in the back and then leave, but they didn’t stop and say anything to us. There were no “private property” or “no trespassing” signs until we came across the church, which is fenced off with a chain link fence and a padlock on the front door. The sign on that gate says “private property” so we didn’t press our luck. There was also a small group of garage-like buildings with big sliding wooden doors that had padlocks and private property signs on them, so we didn’t get into those either. While it’s pretty easy to imagine that there’s not much of interest in the garage buildings, we’re both dying to know what the inside of the church looked like!

See the Ghost Town of Cuervoon the Gallery Page.

Cuervo links on the Internet: